Travels with a Kilt
Highlands ScotlandScotland on the CoastScotland's history

Ancient Orkney: A 4-Day Saga Through the Gem Atop Scotland’s Crown

There are precious few places in the world where the distant past and the present are woven together as seamlessly as they are in Orkney. During my extensive travels through Scotland many of its historic sites and bewitching landscapes have captured my imagination, but I think I left an extra-large piece of my heart in these islands. In August 2013, armed with four days and a bike, I set out to discover for myself this gem at the top of Scotland’s crown.

As time was of the essence I flew to Orkney rather than taking the ferry from Aberdeen or Thurso. If you’ve got the time, however, I can’t imagine a more appropriate way to arrive on Orkney’s largest island, ‘Mainland’, than by boat, just as ancient peoples and the Norsemen would have done. Within an hour of arriving I had rented a bike and was pedaling to one of its most famous locales – the UNESCO World Heritage ‘Heart of Neolithic Orkney’, just over 11 miles west of Kirkwall, comprising the chambered cairn of Maes Howe, the Stones of Stenness and, most spectacularly, the Ring of Brodgar. 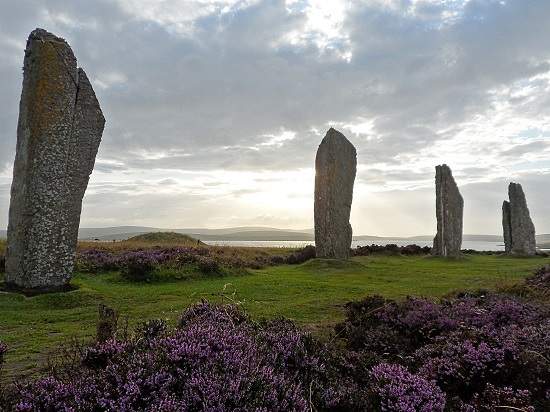 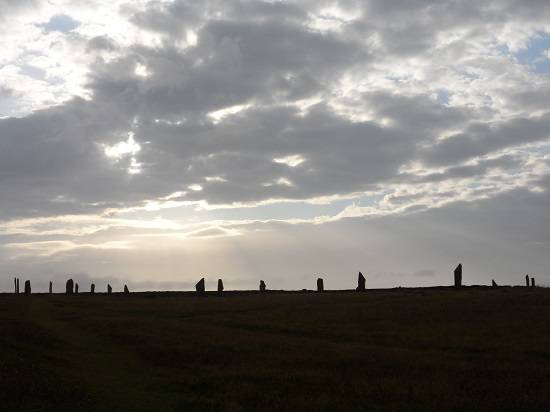 At Midsummer and Midwinter you can watch via live webcam the sun’s rays illuminate the dark depths of Maes Howe’s chamber, which also features the greatest collection of Viking runes outside Scandinavia. In late summer the heather at the Ring of Brodgar is in full bloom, adding to the already electric energy in the air within the circle of stones. If you catch sunrise or sunset here, it will be an experience you’ll never forget.

Heading southwest brings you to Stromness, Orkney’s second-largest town. Small but surprisingly lively, it is the departure point for the ferry to the Isle of Hoy. Hoy is home to the famous sea stack, the Old Man of Hoy, and some of the highest cliffs in Britain, but for me the real treat was along the road from the pier to Rackwick. Halfway between them is the Dwarfie Stane, a single massive slab of hollowed-out rock that served as shelter to Neolithic hermits, stranded Vikings, Victorian explorers and, if the sagas are to be believed, the odd troll or dwarf. Climb inside and rest your head on the surprisingly comfy ‘bed’ carved into the stone, and imagine who (or what) else has slumbered there before you. 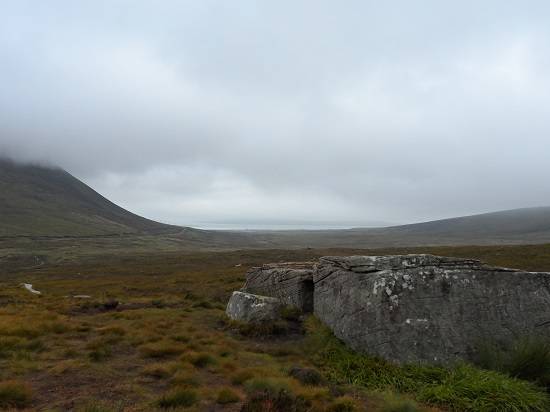 Onwards from Stromness to Orkney’s most famous historic site, Skara Brae, a 5,000 year old preserved settlement that’s the closest you’ll get to a real-life Flintstones set. From Skara Brae the A967 continues north to the Brough of Birsay, where a temperamental tidal causeway takes you out to an old Viking outpost. Walk the stunning coastal path heading east back on the mainland, and you’ll almost certainly be followed by curious seals watching from the waves.

While Skara Brae is by far better known, my favourite ancient Orcadian settlement was the Broch of Gurness, an Iron Age stone tower of a kind unique to Scotland. It’s a ruin, but the byzantine remains of a village surrounding the broch and the views to the Isle of Rousay make you feel a part of the ancient landscape. 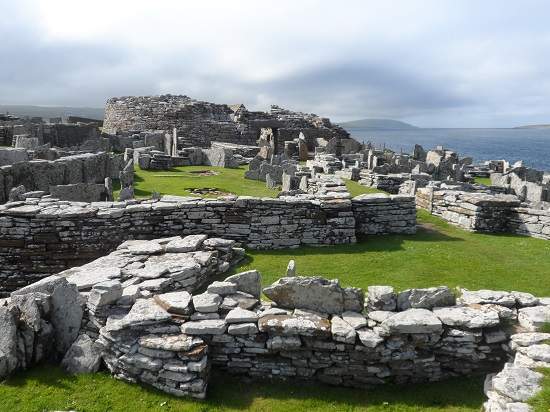 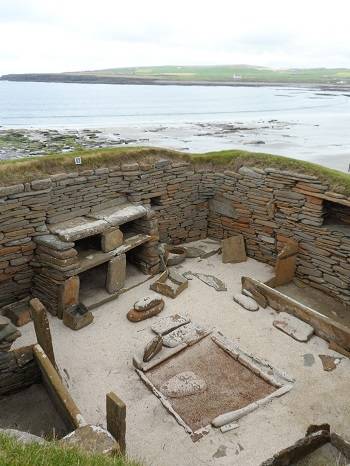 Onwards, then, to Rousay, via a small ferry caught at Tingwall. The charm and wonder of Rousay is second to none, and if you only spend time on one of Orkney’s secondary islands, make it this one. A single road 14 miles long circles it, and the Westness Walk, dubbed the ‘Egypt of the North’ for its archaeological richness, it within walking or cycling distance of the harbour. Chambered cairns are innumerable here, and they sport fantastic names such as ‘Blackhammer Cairn’, ‘Taversöe Tuick’, and the ‘Knowe of Yarso’. Several require you to descend staircases into subterranean levels, and good luck convincing yourself you won’t be devoured by ghouls when you lift an iron cover sprouting from the very hillside to descend into a 5,000 year old tomb. Along with an RSPB preserve and the brooding Midhowe Broch, Rousay was a highlight within a highlight reel. 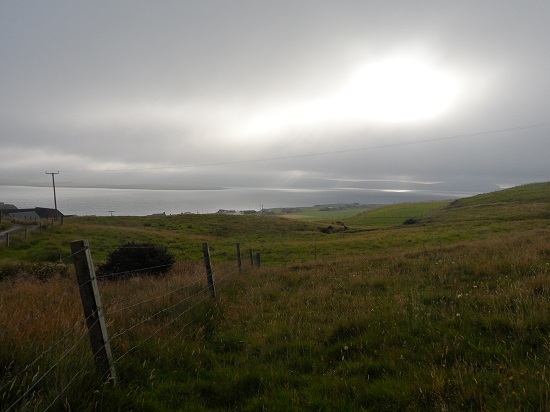 If you really want to feel isolated and adventurous, take the ferry from Rousay to the tiny Isle of Wyre before returning via the same ferry to Mainland. Wyre is only 1.2 square miles but boasts the ruins of Cubbie Roo’s Castle. Built by a hulking Viking named Kolbein Hruga (of which ‘Cubbie’ is a cute short form you wouldn’t be caught dead saying to his face), there’s not much left but it is en enjoyable walk and you get to boast that you’ve been to what is perhaps the oldest stone castle in Scotland, itself the land of castles.

Shooting to the southern end of Mainland from Tingwall, a trip to the Orkneyinga Saga Centre is due for anyone wanting to find out more about the islands’ Norse heritage. It’s self-guided but well worth it, receiving 5/5 on TripAdvisor. Adjacent is the scant ruin of the ‘Earl’s Bu’, one of only two round churches in Scotland and scene of a well-known brawl from the Orkneyinga Sagas. A farm collie patrols the grounds, and beware his considerable charm – start petting him and you’ve got a friend for life that, if you’re anything like me, you’ll have trouble leaving behind. 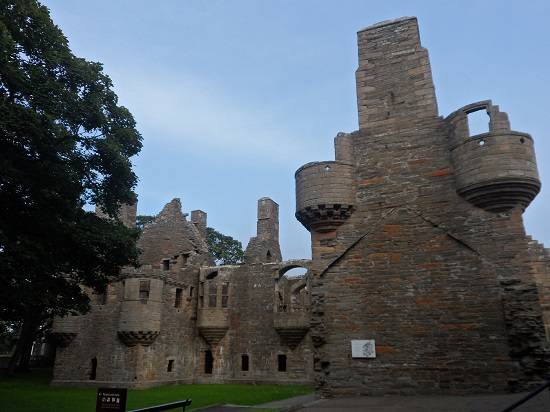 Phew, that’s a lot of cycling! Strong winds (par for the course in Orkney) on the severely exposed road to the Saga Centre left me drained, so it was well past time for a pint back in Kirkwall, which I enjoyed immensely at the seaside pub of Helgi’s. Before taxiing to the airport I wandered around the side-by-side Bishop’s and Earl’s Palaces, St Magnus Cathedral, and the excellent Orkney Museum. Not only does Kirkwall have an abundance of cafes, pubs, historic sites and friendly folk, its residents have previously been ranked as the happiest in the UK. So if all of the above sounds good to you and you’re contemplating a move…I might just beat you to it!

Author Bio: Since arriving on these shores from Canada in 2011, I have lived and breathed Scottish history. Research for a book on Scottish castles has taken me to over 100 fortified sites, and I currently work as a ‘Battlemaster’ at the Bannockburn Heritage Centre in Stirling. In my spare time I live at the library doing research and write articles like these for you to enjoy and be inspired by. All views and errors are my own, and you can follow me on Twitter at @thecastlehunter for regular posts and pictures of everything Scotland.

A visit to Smoo Cave in Sutherland

The History of Linlithgow