Travels with a Kilt
A weekend in...Great Scottish DrivesWalking in Scotland

My Isleathon visit to Barra in the Outer Hebrides

The knees aren’t liking this. Brisk autumnal Scotland at silly o’clock in my customary impractical attire, a pathless and inconveniently steep hill to be climbed, threatening clouds all around….it adds up to a slightly rude start to my Barra #Isleathon weekend adventure. That cooked breakfast wasn’t clever either. But while the rest of me is passing on the message “CEASE AND DESIST!”, my appetite for adventure has overruled all challengers and the prospect of heading straight to Barra’s highest point to get the lay of the land was always going to be high on the itinerary. The view over the Outer Hebrides does not disappoint. 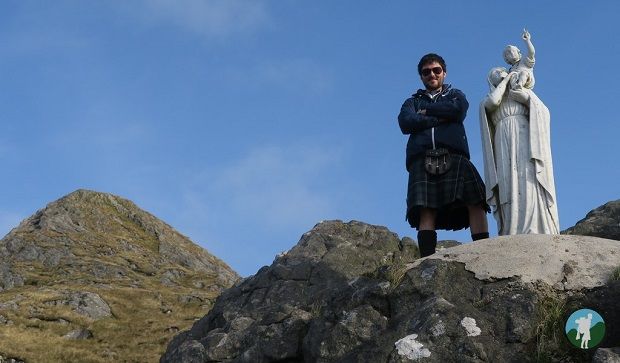 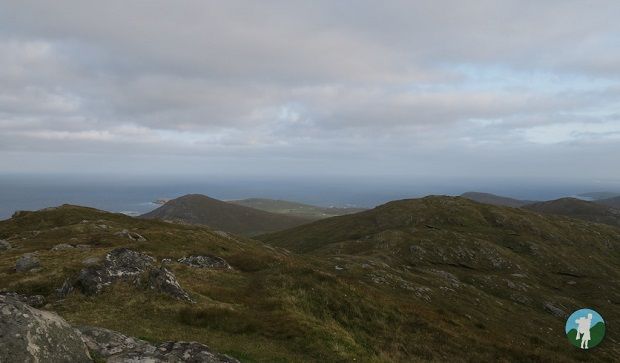 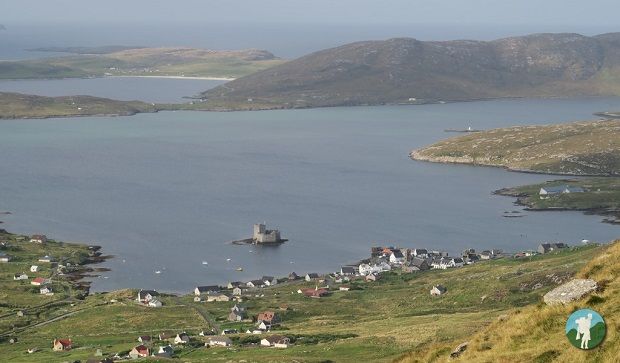 Heaval looms unmistakably over Castlebay and was clocked immediately when our ferry docked last night. Despite the slightly arduous ascent the magnificent views are more than worth every early-morning stretch. On the way to the summit I pass the impressively situated Our Lady of the Sea statue that serves as Castlebay’s answer to Rio’s Cristo Redentor. But don’t stop there! Continue on and you will soon be looking down over not just Barra but also to the scattered Bishop’s Isles to the south.

Having been, seen and conquered Heaval (and all before 9am) it is now time to get behind the wheel and hit the famous Barra beaches. The Outer Hebrides is pretty nifty in the beach department you know. An amusing and creative descent narrowly sees me avoid going ar*e over elbow on more than one occasion but that’s all part of it, is it not? It certainly raised an eyebrow or two as I pass some fellow hikers on their way up. This kilt business really does result in some interesting glances – I’ve increasingly noticed that they tend to fall somewhere between “oh that poor boy, he’s not well” to “look at that poser, thinks he owns the place”. A day in the life of a kilted Scotland travel blogger…. 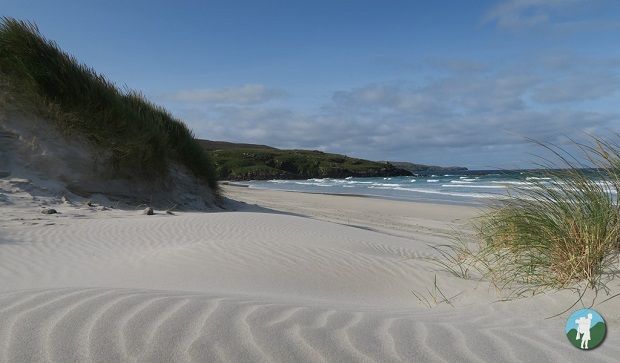 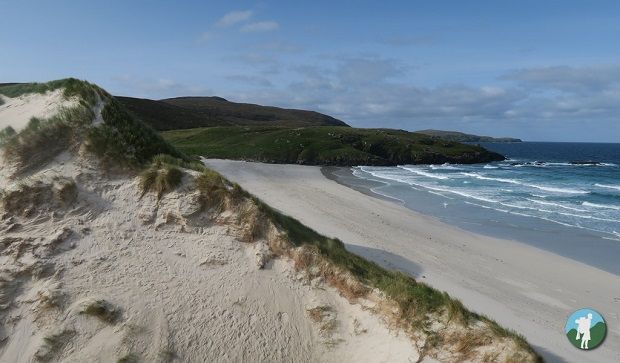 The drive up the east coast of Barra is a rugged and rocky affair with few stand out spots but my next stop at Traigh Mhor sees the beginning of a day packed with some of Scotland’s finest sands. This first port of call is actually Barra’s airport, the only one of its type, and I arrive in time to watch the 10am landing. This is what it’s all about. Transporting people to and from Glasgow daily, it is a rare source of accessibility to the Western Isles. Not to mention a spectacularly bold way to make an entrance – Daniel Craig take note. 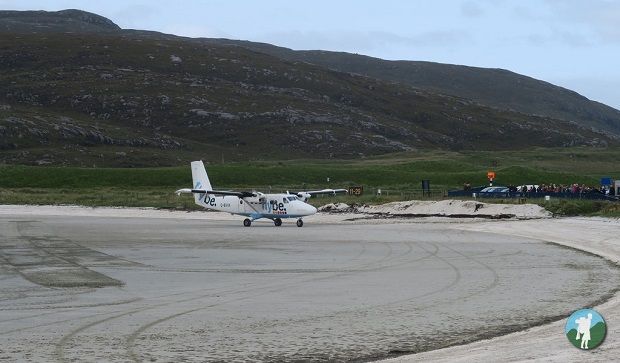 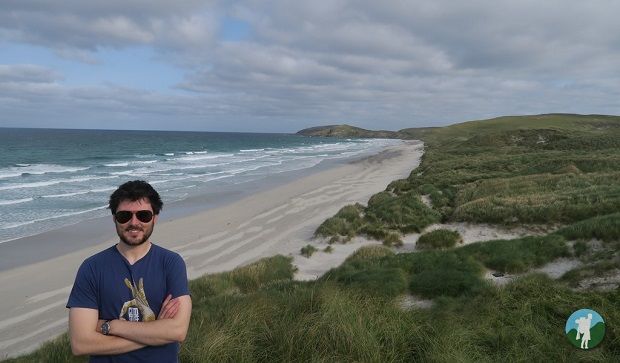 While Traigh Mhor impressively dominates the north east shoreline of Barra, Traigh Eais directly opposite on the west coast is even more glorious. With not another soul in sight, I now realise that the Isle of Harris does not have quite such a clear monopoly over Scotland’s world class west coast beaches. Immaculate and dramatically peaceful, it proves to be a very difficult spot to drag myself away from.

Next up is the drive south, following the western shoreline as my loop of Barra continues on the A888. There are numerous further fantastic beaches to be found along this stretch, most requiring just a short walk from the road to access. Allasdale and Traigh Tuath make for particularly impressive stops but in truth I’m in and out of the car every two minutes all the way south before returning to my starting point at Castlebay. 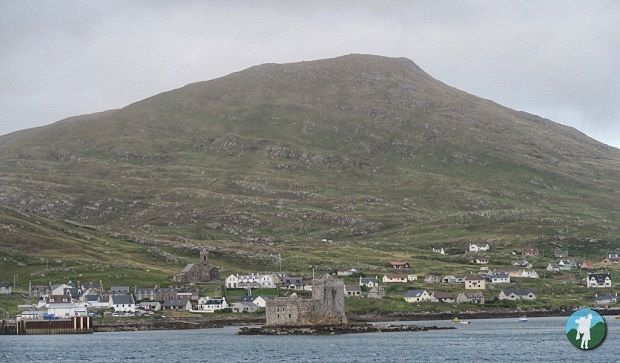 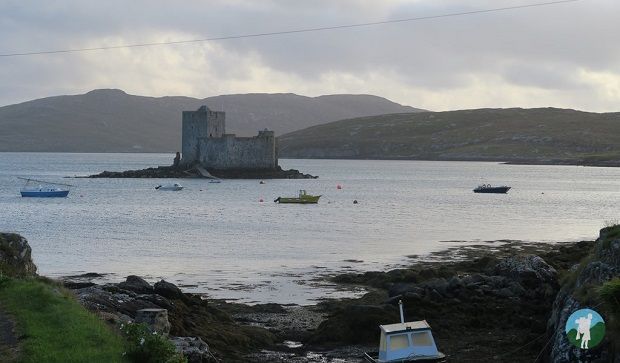 The village could not have asked for a better setting. As the morning’s views from Heaval revealed, Kisimul Castle is amongst the most impressively situated that I’ve ever seen. The castle can be accessed by a short blink-and-you’ll-miss-it boat ride from the pier and is now under the ownership of Historic Scotland. In classic taste, it was leased by the MacNeil family to them for the annual charge of £1 and a bottle of Talisker. While the interior lacks the character and sense of palpable fury in the air that tends to go hand in hand with Scottish historical ruins, there is no denying its beauty and power.

With time ticking on, there was no way my first visit to Barra would not also include a jump over to Vatersay. Joined to Barra by causeway, it is only a short drive from Castlebay to absolute beach perfection at Vatersay Bay and another of the Outer Hebrides’ best spots. While its beautiful west facing neighbour Bagh Siar has that Atlantic drama that we know so well, the east facing Bay simply drops the jaw with its delicate curvature and dreamy turquoise water lapping gently on the almost white sand. The perfect end to an action-packed day. 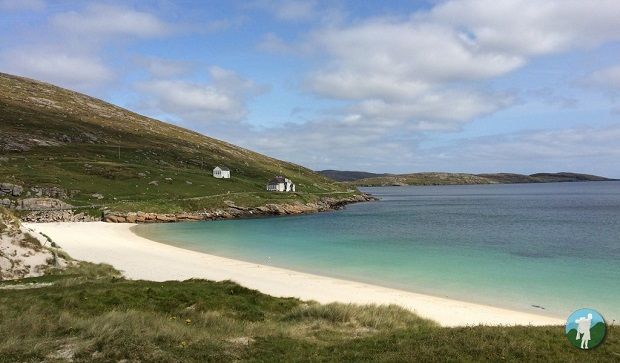 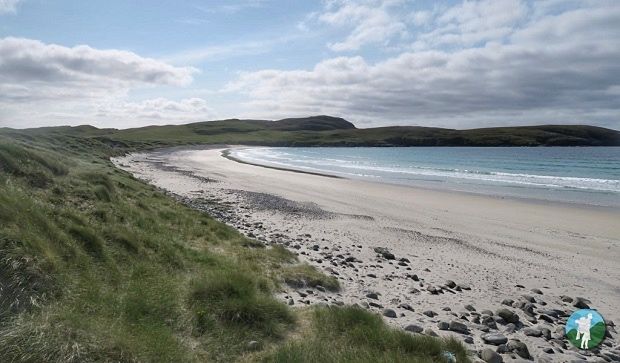 My all-too-short visit to take in this part of the world’s top sites was done pretty much in one day given my arrival and departure times were on Friday night and Sunday morning. While this is evidently possible, please stay longer. Explore more of the east coast, prolong your stay on the beaches, play nine holes of golf, venture further into Vatersay for some walking or even jump over to the likes of Mingulay in search of puffins and caves. Adding an extra day or two will make it all the more rewarding. Just look at that water, you know you’ll want to. 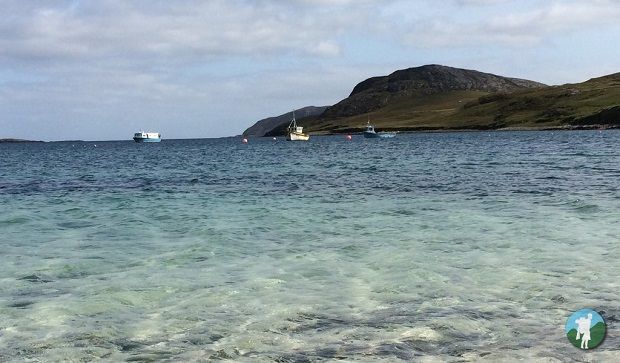 Where to Stay?
Accommodation on Barra is limited and it’s highly likely you’ll be looking to set up base in Castlebay. Conveniently this will allow easy access to the rest of the island, as well as Vatersay. I stayed at the Castlebay Hotel which offers excellent views over Kisimul and a good restaurant menu. Camping is of course also an option for the adventurous.

Getting About on Barra
The road system on Barra is very manageable and in good condition. Single track with passing places for much of the way, it lends itself easily to both car and bike and is only 14 miles all the way around. You can hire bikes in Castlebay and I recommend picnics if you are going to be away from the village for a large part of the day.

To fly or to ferry?
I ferried and the approach into Castlebay was very special and one I’d endlessly recommend. Although the boat journey to the Outer Hebrides is a lengthy one from Oban, having a car opens up so much more of the island and for a first-time visitor such as I am, it was definitely the best choice. That being said, actually LANDING on a beach by plane sounds a wee bit brilliant too. Which confirms that I shall be returning. You can listen to more about my thoughts on Barra on the below radio broadcast, just click play.

What is #Isleathon?
This is the genius creation of the Scotlanders travel bloggers and our partners, Caledonian Macbrayne. The first of what we hope will be many such ventures saw 5 of the Scotlanders, including myself, take on several of the great Scottish isles over the same weekend. While I was enjoying my first experience of Barra, we also covered Mull, Iona, Colonsay, Eigg, Muck, Rum and Skye. The social media campaign reached over 1 million people worldwide over the weekend alone – another hugely successful campaign for us as our debut year draws to a close.

My weekend on Barra

Perthshire in autumn and a stay at the Four Seasons Hotel

A trip to Falkirk, home of The Kelpies 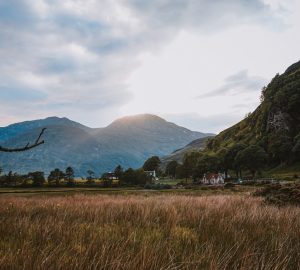